This post is about the second day of my road trip from Delhi to Pune via Madhya Pradesh. Read about Day 1 here.

I was up much before the alarm rang. The mosquitoes had been relentless during the night. We quickly freshened up and got the bikes out. After strapping the luggage on and collecting the ID cards from the hotel reception, we hit the road out of Jhansi. We did not have an arduous day in front of us today so we were taking it a bit easy. Jhansi quickly disappeared as we took the road out towards Khajuraho. It was a two lane, two way highway that was mostly sufficient for the traffic it was catering to. The road oscillated between MP and UP for quite some time. Or rather, if one looks at the map, the borders twists and crosses the road many a times. We crossed the Betwa river a little out of Jhansi. It was another wide river, not as wide as the Chambal but still quite impressive. I guess I am just not used to seeing rivers this far downstream. 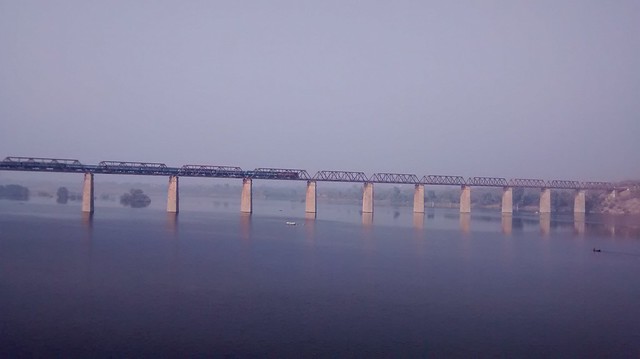 A train crosses over the Betwa river 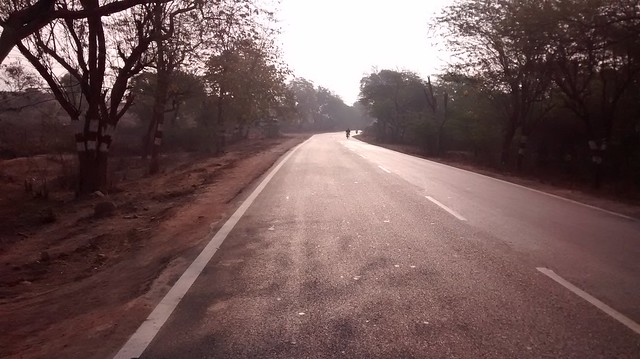 I had been suspicious that my rear tyre was running on low pressure for some time now. I decided to get it checked at a modestly large midway town of Mau Ranipur. Turned out that it was running on 20 PSI, way below the recommended pressure. I got that fixed and then we had some breakfast. I had almost forgotten the kind of breakfast that North India offers. I am more or less used to a breakfast that is light on the stomach. It is usually a big bowl of sprouted grams and a glass of lemonade or the like when I am home. Down south you get awesome vadas or upma which, topped with a filter coffee, makes for a nice breakfast. In Pune I usually have poha for breakfast. But up north, your options are deep fried samosas and pakodis with a cup of sweet tea! Such an oily breakfast would almost inevitably leave my stomach in an uncomfortable acidic state. Despite my hunger, I had a modest breakfast, making sure that I would not unnecessarily overload my stomach. Highway rides are usually bumpy. BBC, however, suffered from no such hesitation. He gobbled one samosa after another as I silently sipped on my tea.

A little out of Mau Ranipur, we crossed the Dhasan river over to MP. This was the end of Uttar Pradesh for this trip. The landscape changed slightly. Populous villages gave way to extensive farmlands. Most of the traffic went onwards to Kanpur while we took the detour towards Chhatarpur. The roads were relatively empty now, but that did not stop buses from running the two wheelers down the road while doing rash overtakes. The Indian roads are truly governed by the jungle law. The bigger vehicles do not care about the smaller ones. The smaller bow down to the whim of the bigger ones. Comply or be gone! 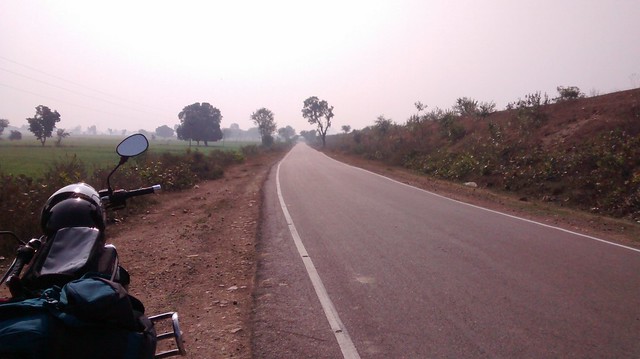 Taking the detour to Chhatarpur

Akansh Dubey, a friend from Roorkee, had helped us plan a bit of the trip. He had also hooked us up with an accomodation in Panna. We crossed Chhatarpur and then came to the T-point where the road to Khajuraho diverges. It was just a little past noon and we had the whole day ahead of us. We decided to take care of our accommodation and drop the luggage off before coming back to see the temples. This would prove to be much easier than towing the bags around or finding a suitable place to keep them. We had no idea whether there would be a cloak room or not, so we decided to play it safe. After all, Panna was just 20-25 kms away from Khajuraho. Well, it actually isn’t. That distance is probably the entry to Panna Tiger Reserve, and even that road is intermittently dug up because of some ongoing construction. It took us the better part of an hour to reach the Ken river and cross to the other side, the forested land of Panna. We stopped at the Tiger Reserve’s gate to inquire about the safaris and to coordinate our guest house’s location with Dubey. Turned out that our guest house was in the Panna city, another 20 odd kilometers from the gate of the tiger reserve. We contemplated our options and decided to ditch the temples. It would mean a 100 kilometers to and fro from the guest house and I was in no mood to ride through those dug up roads without sufficient reason. We had a better option at hand. The afternoon session of the safaris started in an hour or so. So we put our tired behinds on the bike seats again and rode towards the city of Panna.

Our guest house was a PWD Rest House. It is mostly used by government officials and comes at a dirt cheap rate with all required amenities. So it was with our room. It was a big room, big enough to have been suited for another set of beds. The bathroom’s plumbing was a mess yet again, but in comparison to yesterday, we were much better off. Neither of us uttered a word of complaint. A new problem had arisen, however. Typhon’s rear tyre had gone flat! Fortunately though, a puncture fixing shop was right across the entrance of the guest house. I went to get the tyre fixed and BBC freshened up and rested awhile. We found an inch and a half long nail in the tyre and a single puncture hole in the tube. This meant that the nail had gotten in recently. I was really happy with the new Michelin tyre till now and had thought it to be puncture resistant. Seems like I am simply jinxed to get a flat in every trip! 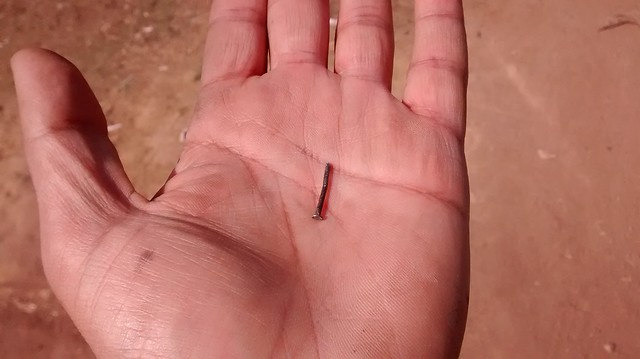 The mechanic deftly fixed the puncture and within thirty minutes we were ready to leave for the tiger reserve. For thirty minutes of hard physical labour, this man charged us a meager 40 rupees. I started calculating the worth of thirty minutes of a software engineer or a lawyer or a doctor. You can called it skilled labour, demand and supply and what not, but this man seemed to work hard enough. The immensity of the gap between the earnings just did not make sense to me.

We saw a few safari jeeps waiting in front of the reserve’s gate when we reached. They told us to go to the office on the other side of the river to buy our tickets and book a jeep. We did so and asked around if someone would be able to help us with a better deal. The package that is sold for the safari is good for 1-6 people. We were just two and would have gladly shared costs with another group of four or less. But there was no one waiting and we were wasting precious time in a futile bargain. We quickly agreed to a somewhat discounted jeep rent and bought our tickets. The price was not too hefty to begin with. Kailash was to be our guide for the evening. We said our hellos and sat in the jeep which took us back across the river to the entrance that we had crossed a few minutes back. It was close to three in the afternoon when we entered the tiger reserve. The talk was that there had been sighting in the last week in the afternoon session itself. Plus this was a good season for safaris, warm and dry, when the wild animals come out seeking the cool of water bodies. This raised my hopes a little but Kailash was quick to point out that nothing was certain in the jungle. After all, who can control the wild ones. Who indeed! 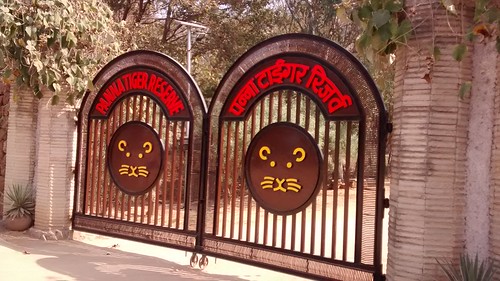 The jungle was quite an experience. I have been to safaris before but they always seemed like a staged tour of the jungles. Not that this was not a tour, but it had a more authentic feel to it. We were in the park till the park shut down at sunset. The driver raced around as per our guide’s instructions, heeding alerting calls of the deers and peacocks. We stopped when we saw something of interest, waited if there seemed to be a chance of sighting a big cat, coordinated with the other jeeps to figure out if there was some activity in the areas they had visited. But alas, we did not see any big cat on the safari. We saw loads of deer - sambhar, spotted and nilgais, lots of peacocks, a group of wild boars running across a plain and even a couple of crocodiles lounging on the riverside. But there was absolutely no cat activity; no leopards or tigers. 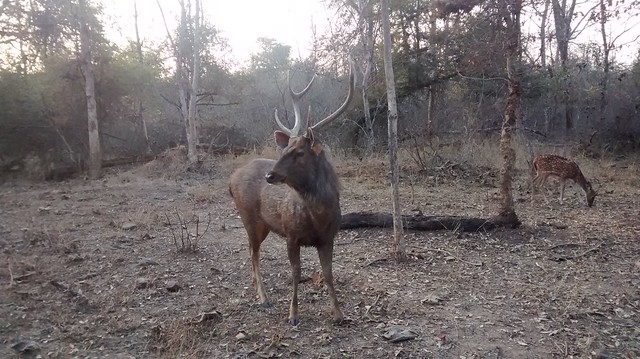 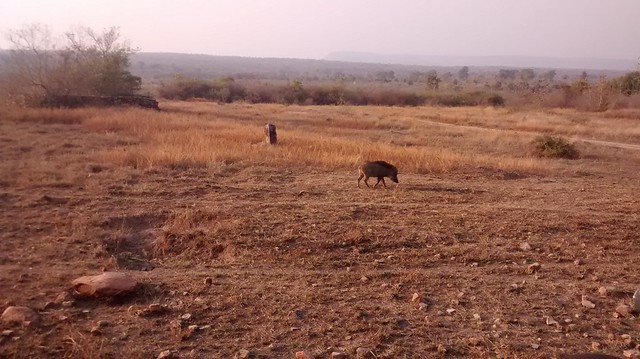 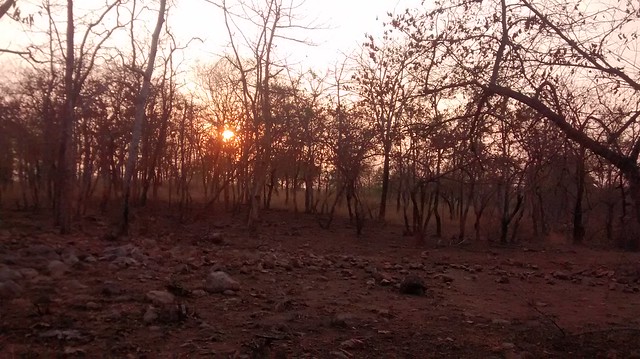 Watching the sun set in the National Park 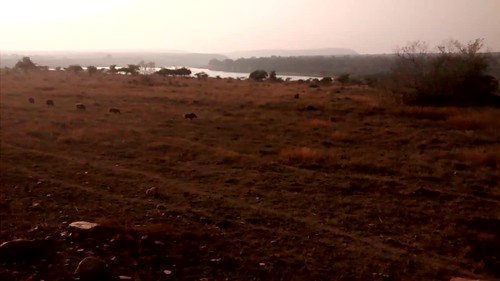 I was somewhat disappointed but I did understand that it is all a matter of chance. Moreover, if I wanted to do safaris and sightings seriously, I would have to do more than one impromptu safari in the jungle. Perhaps stay for a couple of days and come for as many sessions as I can. I learnt that the reserve was part of the Vindhyachal range and that the language spoken in these parts, which bore an uncanny resemblance to Bhojpuri, was Bundelkhandi. Also, we got a recommendation for a dhaba and the speciality food of these parts - a simple meal of arhar ki dal, rice and tamatar aaloo; add a fish if you are a non-vegetarian. On our way back, the Ken river reflecting the evening sky managed to reflect my mood somehow. Yet another safari without a sighting.

We followed up on the dhaba recommendation and ate to our heart’s content. Then we rode back the twenty kilometers to Panna. The headlights were on and the glare gave me a difficult time as usual. I wonder what people think when I am frantically blinking my headlight for them to notice and lower their’s. I am sure they are not even aware that the headlight has two modes and which is to be used when. Morons of the highest degree, all of them.

We picked up a bottle of Old Monk on our way back to the room. Then we watched the movie Titli. It was a good story ruined by the monotonic acting of the protagonist. Almost everyone else had acted well. Anyhow, the day complete and us sufficiently tired, we drifted off to sleep one by one. We had not travelled much that day; just over 250 kilometers with a meter reading of 753 km, but the day had still seen a lot of excitement!

Here is the route taken on Day 2 on Google Maps.

And here is a complete album of the road trip. 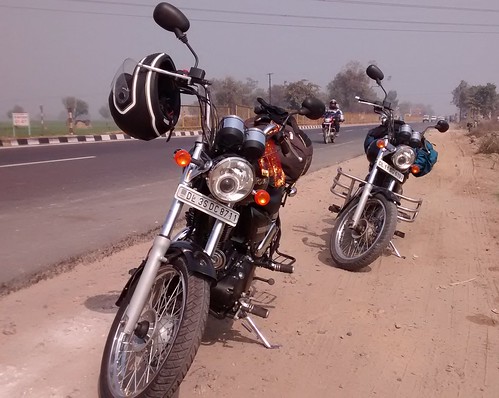